The guest selector sessions on Twitter are starting to gather speed now... From the 12th to the 18th of December 2010 we have a cracking selection from an old friend of NuNorthern Soul, Bart Sibiel from the Belgium collective, Onda Sonora. Based in Brussels these guys are part of a nu-wave of promoters, DJs and all round party starters pushing all things soulful.

Each day at 11:20am GMT, we shall tweet out a #NNSTOTD, we do this because we believe that good music is to be shared, music sounds so much better when it becomes a communal experience. To get involved simply follow @NuNorthernSoul on Twitter, all we ask is, if you like the track, RT it your followers and spread the joy!

You can get involved with the wonderful world of Onda Sonora through the various social networks they populate with the good word...

Anyway, the Onda Sonora crew are busy boys, here is what they have coming up... 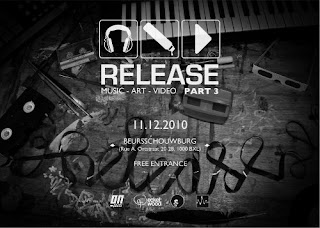 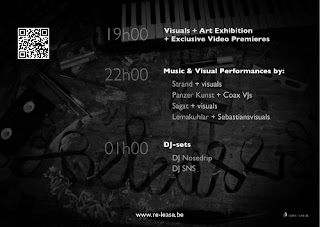 11/12/2010 – RELEASE – Beursschouwburg, Brussels.
RELEASE is an effort to get creative people out of their cosy natural habitat and make their work heard or seen by a wider public. A bit like CDR in London and other initiatives elsewhere but not bound to music alone. We try not to limit ourselves to genres or styles. Which makes Release hard to pinpoint by a simple baseline. What connects the people we promote is their wayward, forward-thinking approach resulting in a off-centre yet accessible art.
We organize concerts, jams, expositions, screenings, workshops, lectures, … by preference not separately but combined as a multifaceted experience. We also make use of the many different media at our disposal; websites, radio shows, (social) networks, viral videos, …
Our next event, the third one we do, happens on December 11th. With Sagat, Strand, Lemakuhlar and Panzer Kunst as the local heroes performing on stage. Nosedrip and SNS will DJ at the afterparty. Before the gigs there’s an expo and screenings of videos. Entrance is free.
RELEASE is a joint venture between Onda Sonora, Laid Back, Eckelwood and On-Point.
http://www.re-lease.be/ 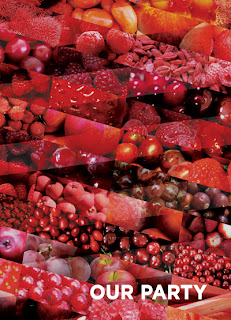 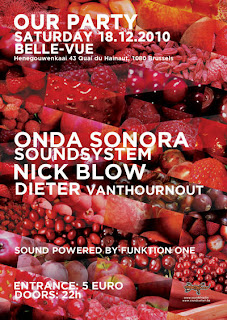 12/12/2010 – OUR PARTY – Belle-Vue, Brussels.
This is the party we organise with our good friend Nick Blow. An expat in Brussels, like so many, but one we’ve never felt was a stranger as he loves the same music as we do. A fellow Southport Weekender enthusiast too.
Our aim is to organise our ideal party. Meaning an excellent sound (Funktion One, UREI rotary mixer, Bozak Isolator), a welcoming atmosphere, fair prices, lots of lovely people and quality Soulful music. Something we think we’re slowly succeeding at. Building a nice party with our own little community of Brusseleirs, Flemish people, Walloons and expats.  Proving we can live together.
At the previous editions we’ve had Rainer Trüby, Vanessa Freeman and Phil Asher as guests. The last edition of 2010 will be a residents only affair. With our radio hosts, good friend and esteemed Onda Sonora family member Dieter handling the warming up duties.
http://our-party.tumblr.com
Posted by NuNorthernSoul at 14:24